Real Estate, Once a Drag on Growth, Reverses Course as Other Sectors Tail Off

The U.S. housing market, which plunged the economy into recession five years ago and was a persistent drag on the recovery, is now a key economic driver at a time when other sectors are slowing.
Economists project U.S. gross domestic product growth will slow in the final three months of the year from the sluggish 2% annual rate in the third quarter. Businesses, unnerved by the prospect of federal tax increases and spending cuts known as the "fiscal cliff" taking effect in January, have slowed their pace of investment spending. Defense spending also is expected to slow, further weighing on growth.
But while those economic pillars weaken, an improving housing market is buoying consumers' spirits and giving the economy its biggest lift since the real-estate boom. Macroeconomic Advisers projects the economy will grow at a 1.4% annual rate in the fourth quarter, with housing contributing 0.4 percentage point. IHS Global Insight is projecting a 1% growth rate, with housing contributing 0.53 of a percentage point—the largest contribution since 2005.
"Housing seems unfazed by the uncertainty that is plaguing other parts of the economy," said Ben Herzon, an economist with Macroeconomic Advisers.
The real-estate recovery is just beginning, of course, and housing's role in the overall economy remains diminished by five years of rising foreclosures and falling prices. New loans aren't easy to come by as lenders grapple with distressed mortgages. Millions of homeowners owe more than their property is worth. Still, housing's steady improvement is "going to offset some of the slowdown in manufacturing, and it is one of the reasons we think we're likely not to see a double-dip recession," said Doug Duncan, chief economist at Fannie Mae.
Home prices rose 3.6% in September from a year ago, according to the S&P/Case-Shiller National Index out Tuesday. Prices are up 7% through the first nine months of 2012, which is the strongest rise since 2005 and puts prices on a trajectory to beat even the most optimistic forecasts from earlier this year. The gains also are broad-based, with the 20 cities tracked by the Case-Shiller index—except Chicago and New York—showing year-over-year gains.
The housing turnaround has been a boon for real-estate brokers and home builders, some of whom have seen their stock prices more than double this year. Retailers have seen a new stream of customers ready to decorate, furnish and upgrade their homes while investors are spending at hardware stores to renovate previously foreclosed homes. Banks, meantime, have posted record mortgage profits amid high refinance volumes and stronger demand for new loans.
Beyond those direct benefits are a number of indirect effects. Rising home values make homeowners feel better about their finances—making them more likely to spend and, with interest rates low, more comfortable about taking on debt. An index of confidence released Tuesday by the Conference Board rose to 73.7 in November, the highest level since February 2008.
"Housing's share belies its importance to the economy," said Joseph LaVorgna, chief U.S. economist at Deutsche Bank. "The confidence effects are massive."
Rising home prices are making consumers feel flush, which may eventually spur them to spend more: New home-equity lines of credit are projected to grow by 22% this year to $77 billion, a three-year high, according to Moody's Analytics. "We can start to see the housing market as an assist to our growth rather than an anchor," said Frank Blake, chief executive of retailer Home Depot Inc. on an earnings call this month.
Rising home values have given Clara Soh confidence about her finances—and she is spending accordingly. The 35-year-old senior director at a pharmaceuticals trade group has spent the past five years saving more and spending less. With interest rates low, she recently refinanced a Portland, Ore., home that she has been renting out since her recent move to Washington, D.C. That lowered her payment by $300 a month—while the home has gained $100,000 in value. Now she plans to pay off her 30-year mortgage early and splurge a little: She recently spent $300 on clothes, $1,000 on climbing gear, and $700 on a new bike. "I feel a little more confident about the direction things are going. I have a little more of a cushion," she said.
While rising prices now are driving the housing market forward, that couldn't have happened without a painful cycle of losses. Lower prices and rock-bottom interest rates have boosted affordability. The average monthly mortgage payment on a median-price home in October, assuming a 10% down payment, fell to $720 at prevailing rates, down from nearly $1,270 at the end of 2005.
Rising rents and an uptick in household formation have ignited demand, which, in turn, has pushed inventories of homes for sale to their lowest level in at least a decade. The upshot: More buyers are chasing fewer homes, pushing up prices.
"Consumers are trying to find a house to buy and they can't," said Ivy Zelman, chief executive of research firm Zelman & Associates. In Phoenix, Maracay Homes sold out four of its 12 developments this year and will add 10 new ones over the next six months. At Whispering Heights, a Maracay development in Chandler, Ariz., that courts move-up buyers with homes priced from $250,000, the company sold as many as 10 homes a month, up from three a month last year. They sold out in October.
Write to Conor Dougherty at conor.dougherty@wsj.com, Nick Timiraos at nick.timiraos@wsj.com, and Neil Shah at neil.shah@wsj.com 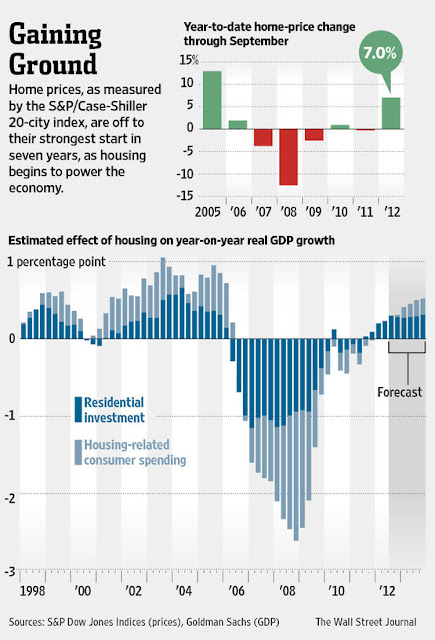 Posted by Unknown at 2:55 PM No comments:


MBA - Mitch Kider - The Power of Homeownership from Group Inc on Vimeo.
Posted by Unknown at 9:11 AM No comments:

No
Author(s):
Kerri Ann Panchuk [1]
The latest Obama Administration Housing Scorecard shows underwater borrowers benefiting from the rising tide of growing home sales and higher prices. For many borrowers, it means losing their underwater status. But heading into 2013, the Treasury remains cautious about calling it a solid recovery.
Rising home prices lifted more than 1.3 million underwater homeowners above water this year, the Obama Administration's said in its October Housing Scorecard report.

The latest report shows more signs of a strengthening housing market, but the Treasury is still careful to say the recovery overall remains fragile.

The government's Home Affordable Modification Program, which launched in 2009, has been the catalyst for close to 1.3 million homeowner-relief actions in the past three years, the Obama administration said.

With so many families in the Northeast now struggling with damaged and inhabitable properties, the Treasury announced that servicers partaking in the Making Home Affordable Programs should review existing guidelines for providing Hurricane Sandy victims with additional housing-related relief.

The program guidelines allow servicers to offer qualified, distressed storm victims tied to Home Affordable initiatives with a minimum of 3-months forbearance. The borrower's property has to be in a region designated as a disaster zone to qualify for aid. The New York metro area currently has about 60,000 homeowners partaking in HAMP.

"As the October housing scorecard indicates, our housing market is continuing to show important signs of recovery – with the FHFA housing price index posting its largest annual gain in five years and new home sales at its fastest pace since April 2010," said HUD acting assistant secretary for policy development and research Erika Poethig. "But with so many households still struggling to make ends meet, we have important work ahead. That is why we are asking the Congress to approve the president’s refinancing proposal so that more homeowners can receive assistance."

Homeowners who benefited from the government's Making Home Affordable programs over the past three years saved roughly $541 on their monthly mortgage payments, the scorecard said.

To date, the HAMP program has launched 1.1 million modifications. Close to 14,000 new modifications were launched in the in-between period from the last report to Friday's survey.

As for what is causing a tepid housing recovery, the Scorecard shows home prices and home sales on the rise, which is buoying the recovery somewhat. The latest Case-Shiller report has the average home price hovering around $145,900, up from $143,000 a year earlier. That figure, to date, is still lower than the $150,500 mark recorded at the beginning of the housing crisis four years ago.

The supply of houses in the U.S. also fell from 2.4 million a year earlier to 2.320 million in the latest survey period, according to NAR and government data.

The housing recovery also is benefiting from record low interest rates, with the average 30-year, fixed-rate mortgage hitting 3.39% in the most recent report, down from 3.41% in the September report and a drop from 4% last year.